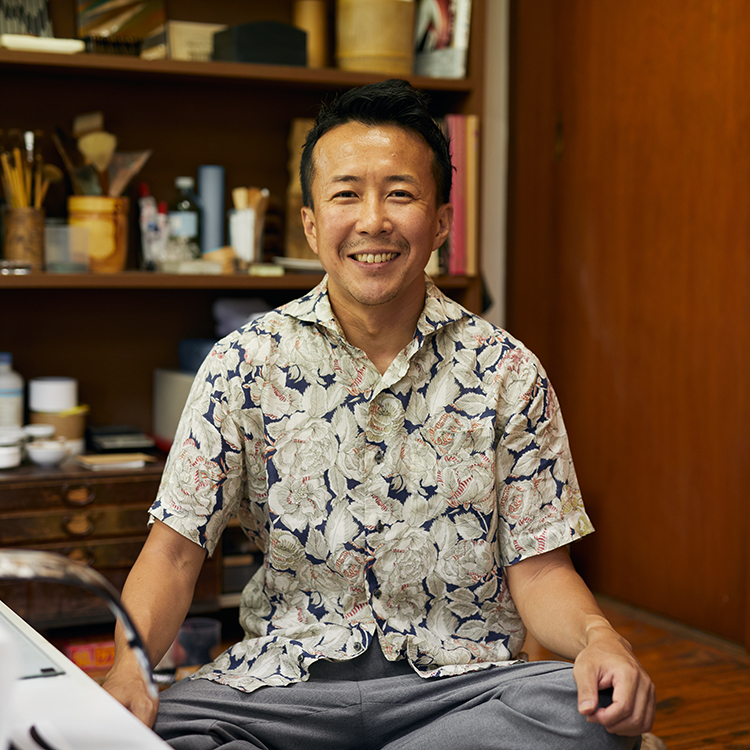 Optimization of the Inherited Tradition

This inspired us to think that what makes an authentic craftsman is being aware of present and expressing the sense of uniqueness in himself, while not willing to make a single compromise on traditional techniques that he was passed down. Makie shines the most when the artists could precisely halve the gold on the surface at the particle level. The lacquer works of him shows how can human be more precise than machines by his perseverance like an athlete.

Issai HattoriLacquer Artist
Born in Kyoto, 1975. Graduated Toyama University, Faculty of Arts and Culture and started working at Miyazaki Wood Systems Inc. in 1998. Studied under Shunshou Hattori from 2001 and started his own business in 2018. Awarded three significant prizes in 2019.

About Lacquer Arts and Makie

Makie is one of the decoration methods which is Japanese lacquer art sprinkled with gold or silver powder, developed in Japan. It is said that is was established in Nara era (A.C.710-A.C.794) and it had been a great industry for long period of time because production of high-quality lacquer was prosperous in Japan. Moreover, the humid climate in Japan enabled advancing delicate Makie technique because of the characteristic of lacquer which dries by humidity.

The oldest existence of lacquer art is the offering to Emperor Seimu, “Kingin denkazari no karatachi” remains in Shoso-in. In the donation list called “National Rare Treasure Book”, the decoration is written as “Suekin Scattering work”, and the technique is explained as scattering Suekin (gold powder) on objectives.
Lacquer art has been very familiar with Japanese culture since early age that one of the techniques started by Koetsu Motoami in early Edo period, has been evolving for 1,500 years. Including expressions that have had an impact on future generations called Koetsu Maki-e, which are arranged with gold and silver shells and blue shells.