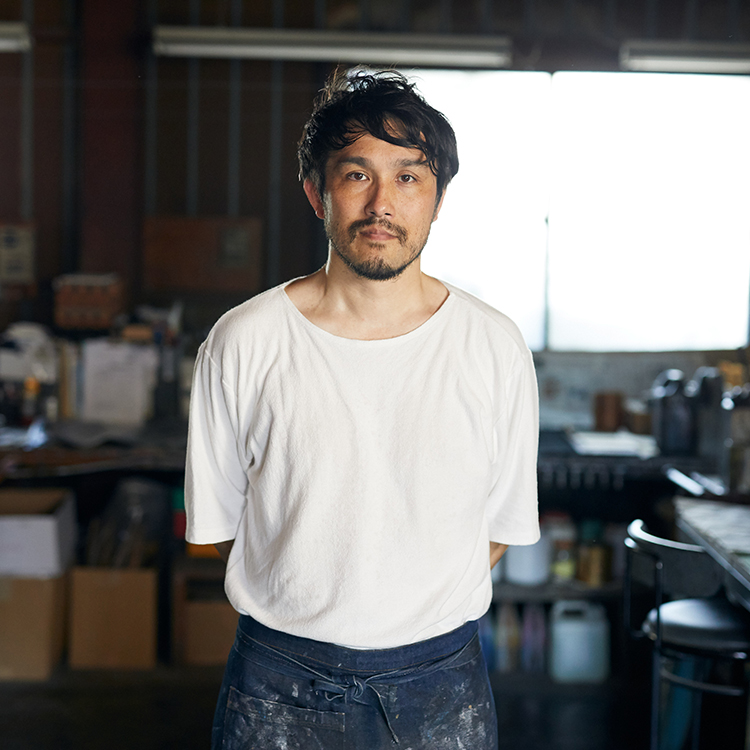 The Infinite Charming Sense of Yarning

The yarning of such unique materials is what creates the Nishijin textile straps beautiful and highly reputable worldwide. Mr. Murata highly values the beauty of the traditional yarning method as it can orchestrate the eloquence of the whole textile while maintaining its own gorgeousness. Mr. Murata emphasizes on the importance of continuous innovation while maintaining the great tradition inherited over the time. He strongly believes it is his responsibility to create the new tradition by challenging the new things and continuesly to seek out for another new developments within his expertise in yarning. “This is ideal ecosystem of the tradition” according to Mr. Murata.

Gold leaf artist Kohei MurataRakugei Traditional Yarning Atelier
Mr. Murata was born and raised in Kyoto in 1977. He is the third generation of the traditional Hikihaku (Yarn) atelier designated for NIshijin-textiles. He received the extensive training on the yarning technique from his master, father, while he was attending the university. He is certified Japanese traditoanl craftsman appointed by the Ministry of the Economy.

The traditional Japanese yarning is significant components of the Nishijin textile as it plays an important role in creating such depth perception on its textile. This traditional yarning method is not primary for designing the patterns. Its primally application is to deliver the depth perception onto the design pattern of the Nishijin textile. It consists of the décor of the colored Japanese paper coated with urushi lacquware with some touch of the gold / silver leaf. It is cut into ultra-thin strings and then formed the flatten design piece altogether. Each string is yarned onto the textile. This method requires to yarn both front and back side of the textile alternatively by vertically weaving each décor string onto the textiles. The name HIkihaku in Japanese originated from its ancient word defined as the act of pulling its ultra-thin yarn in such alternated yarning process.

The traditional yarn master delivers the beautiful piece of the art into the Japanese paper cut into ultra-thin width of as thin as 0.3mm. It then is passed onto the textile craftsmen for the completion of the Nishijin textile strap.