Why “visualization of aerodynamics” was born

In commemoration of the first collaboration between Kiwakoto and Negroni, Kiwakoto director Yoshimura and Negroni director Shuhei Miyabe, and Jun Nishikawa, a motor journalist as an introducer, a talk event was held. We will deliver a part of the development story here. 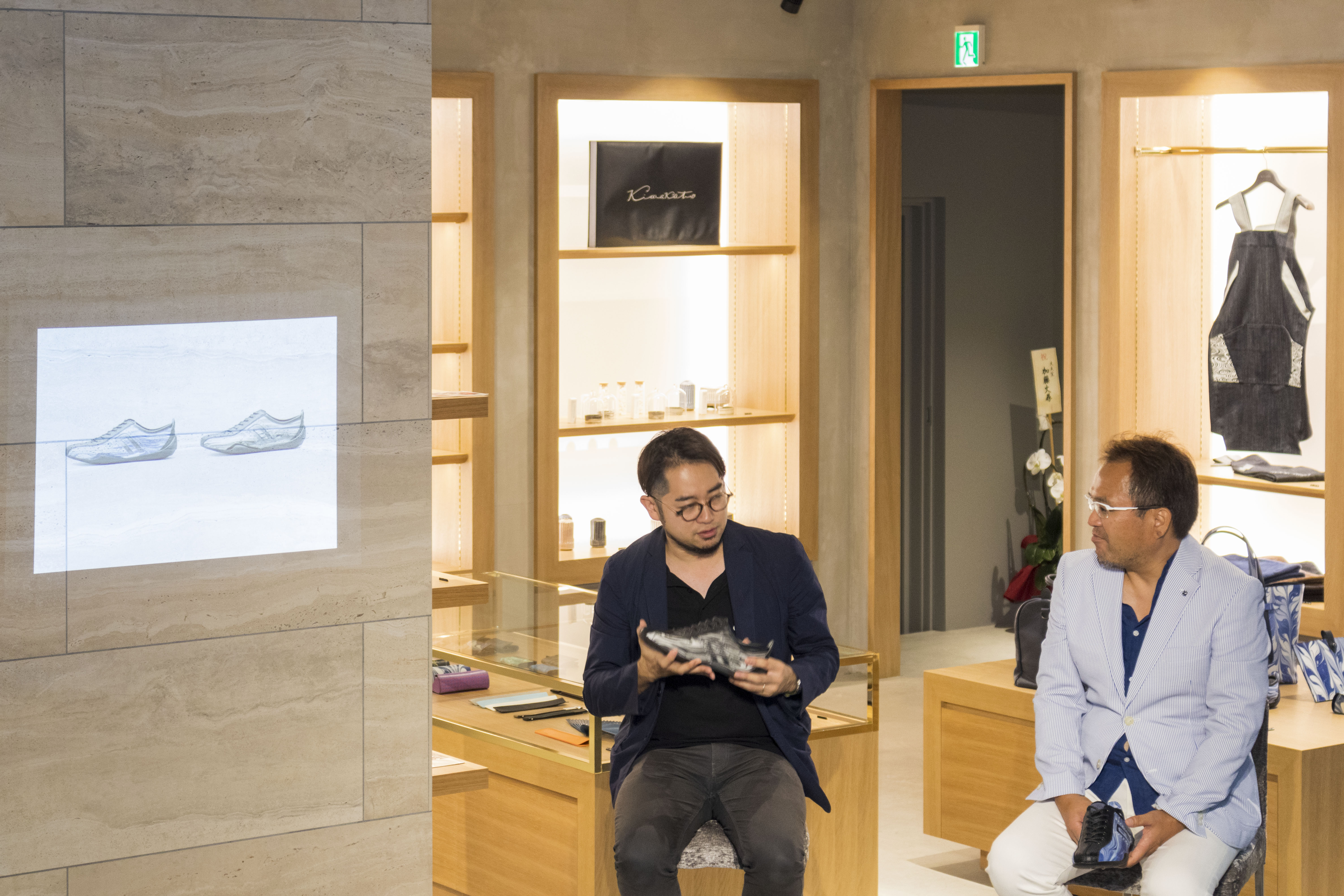 Miyabe：
At the time of this collaboration, I wanted to make something to be able to introduce “something cannot be replaced” by the history of thousands of years in Kyoto.

On the first day I came to Kyoto, I went to see various kinds of materials with Mr. Yoshimura, but at that point I didn’t have any ideas. There were a lot of wonderful materials and patterns, but I thought there was a sense of incompatibility as a driving shoe. I couldn’t imagine the effect. Then I asked to go and see the workshop of SONOBE Dye Work.

Marbling is to draw patterns by hanging the pigment on the water and draw a line, the most surprise for me is the perfect timing of put fabric on the water and then quick take it up. In the assumption of the minute, I had an image that had been immersed in water and waited until the color was settled. When I saw the movement, I felt it just like camera shutter.

I was reminded of the experiment of fluid dynamics while I was looking at the pattern on the water surface. Fluid, there is a rule in the flow of water and air, and it moves by the rule “it must be sure to come out once in one place”. The instantaneous flow is usually visualized by recording it as a photograph that is not recognized visually. The collaboration process was created when I thought that the movement of the fluid was able to cut the movement of the fluid in the form close to the photograph.

Yoshimura ：
When Miyabe said, “I want to express the fluid”, and when I showed the picture of aero dynamics used in the wind tunnel experiment of the car, I had the common recognition of what I wanted to express. The body design of the car also carries out aero management from this fluid dynamics and controls air resistance. It was an instant synchronized with the flow of the air and the flow of the ink.
This cutting was an exciting idea for kiwakoto. When we first met the marbling, we were fascinated by the beauty of the pattern of the water surface changing rapidly. Miyabe paid attention to the point of “cut in a moment”. I was surprised at the point of view of the collaboration. 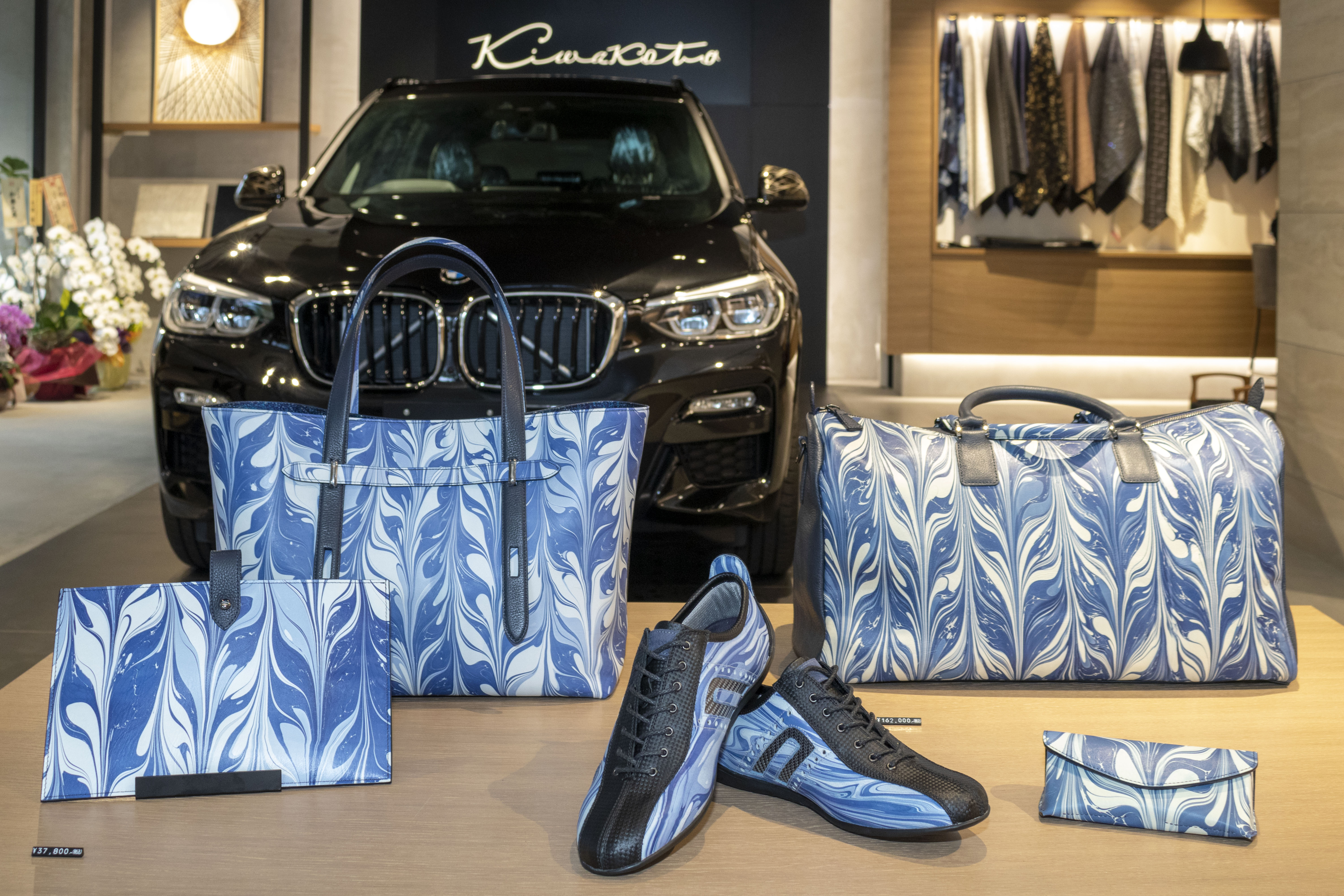 Nishikawa：
I met kiwakoto for the first time in 2018. I liked the blue marbling and bought a tote bag, but I was surprised that they arranged many bags at that time. Each of them is different! It is fun to choose them, everyone is unique. It’s so fun to choose them.

Yoshimura：
I am grateful to Nishikawa for various support from the beginning of the brand rise. This collaboration wouldn’t be realized if without Nishikawa. Because Nishikawa is a Negroi lover, we can contact each other immediately. 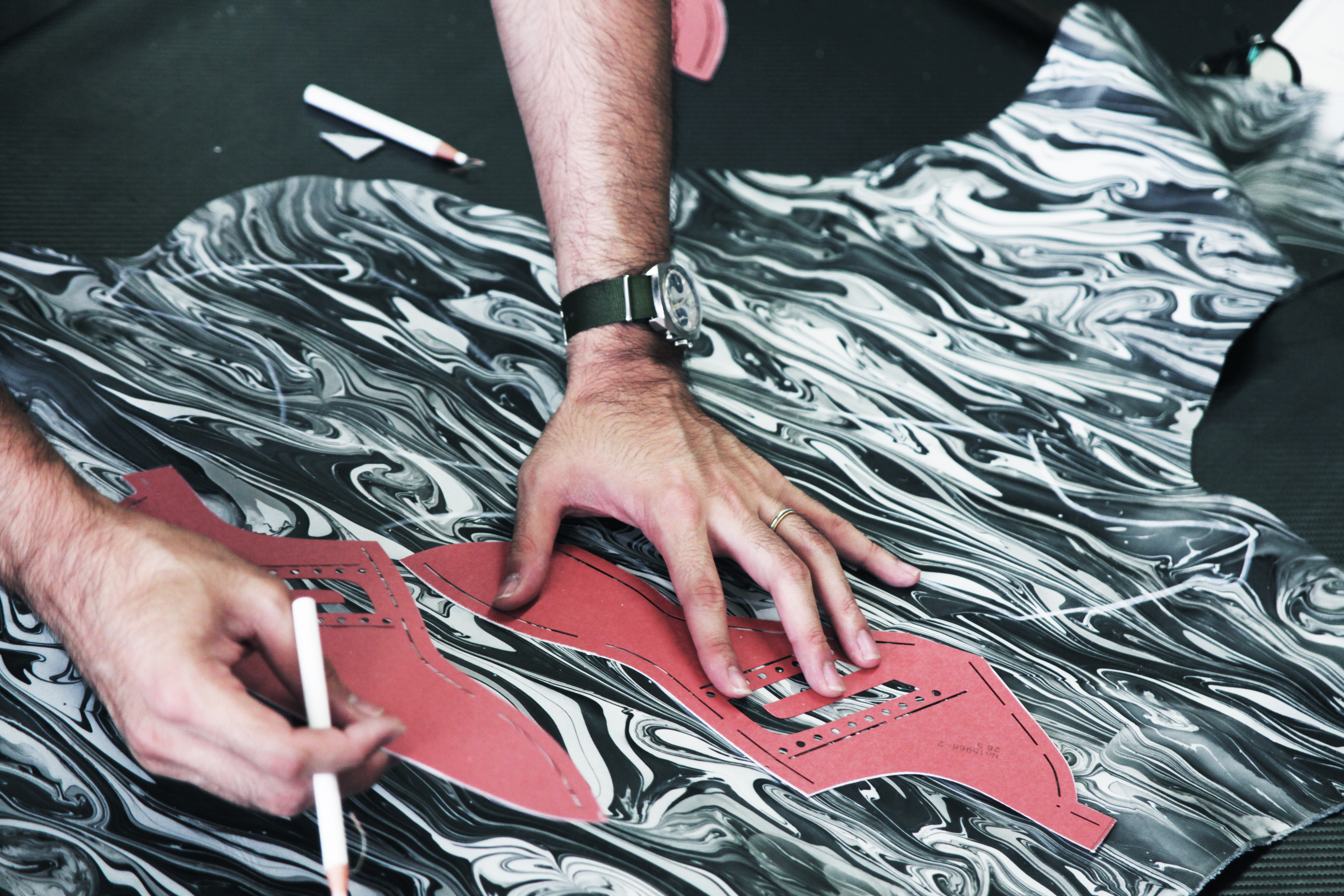 Miyabe：
I do various collaborations, but there are rare collaborations can be done at the time of the start. This time, the keyword of the water and air flow, fluid dynamics, and the moment to came out, and the theme of “the visualized air” was found, and the following was able to be made in the viewpoint of how to express it to the commodity.
This dyed leather is very difficult to make on the driving shoes. While the irregular pattern is used, the process of taking parts is the hardest to express the flow of the streak from the front to the rear of the shoe. After all, the most difficult part had to be overcome by ourselves.

Nishikawa：
It is like the wood panel of the Bentley or Rolls Royce. The craftsmen made the wood into shapes and kept the original beauty of itself, then paint on the surface. The full carbon body provided by Lamborghini, McLaren and Bugatti is aligned with the fabric pattern of the center. It is close to madness of the craftsman’s request.
By the way, what is the best condition of this time?

Miyabe：
As mentioned above, it is glad that the flow which goes out along the form of the shoe can be seen, and if it was only flowed would be boring, the pattern’s shape like an island occasionally , and it made possible to discover such a fun.

Yoshimura：
If you dye leather several times, it can be said that it is pattern or not well dyed Although there are very distressing places, as you two said, it’s the charm of this material that can find “as your favorite”. Mr. Miyabe once said that he didn’t want to knock on the gate of traditional crafts in Kyoto alone. On the other hand, how to grasp the technology and its expressiveness closely linked with thousands of years of dependence, and how to reorganize it, using different perspectives and different entry points. Kiwakoto itself, like this time, consults with various fields of expertise to generate more meaningful collaboration. This cooperation does not mean the end. We will develop commodities together from a new perspective!

Profile
Jun NISHIKAWA Motor journalist
Born in 1965, Nara Kyoto. Graduated from Engineering Department of Kyoto University. He has been the Deputy Editor of Recruit Car Sensor Company and made an independent editorial production in 1999. Writes for magazines, news expresses and net-media as a freelancer. Writes articles about luxury car, vintage car and super sport. During 2018 to 2019, serving as the selection committee for Car of The Year Japan. And he is member of Japan journalist association. He writes and spreads the history and culture of automobiles and keep criticizing the industry and civilization. Now living in Kyoto.

Shuhei MIYABE NEGRONI director
Born in Tokyo in 1984. After entering the site of the magazine editing, he joined the company, a mariner at the age of 25. Start to engage in the design and manufacture of shoes. Since 2015, when he became a brand director, he held a motor sports festival “GOODWOOD FESTIVAL OF SPEED” and “GOODWOOD REVIVAL” every year to gain overwhelming support from car makers and enthusiasts in each country.

Masaru YOSHIMURA Kiwakoto director
Experience management consulting, launching new services. He was born in Kyoto and was taught by the Okinawan people in the tradition of traditional crafts in Kyoto, and he was absorbed by it, so he wanted to do business related to craftsmen and traditional crafts.