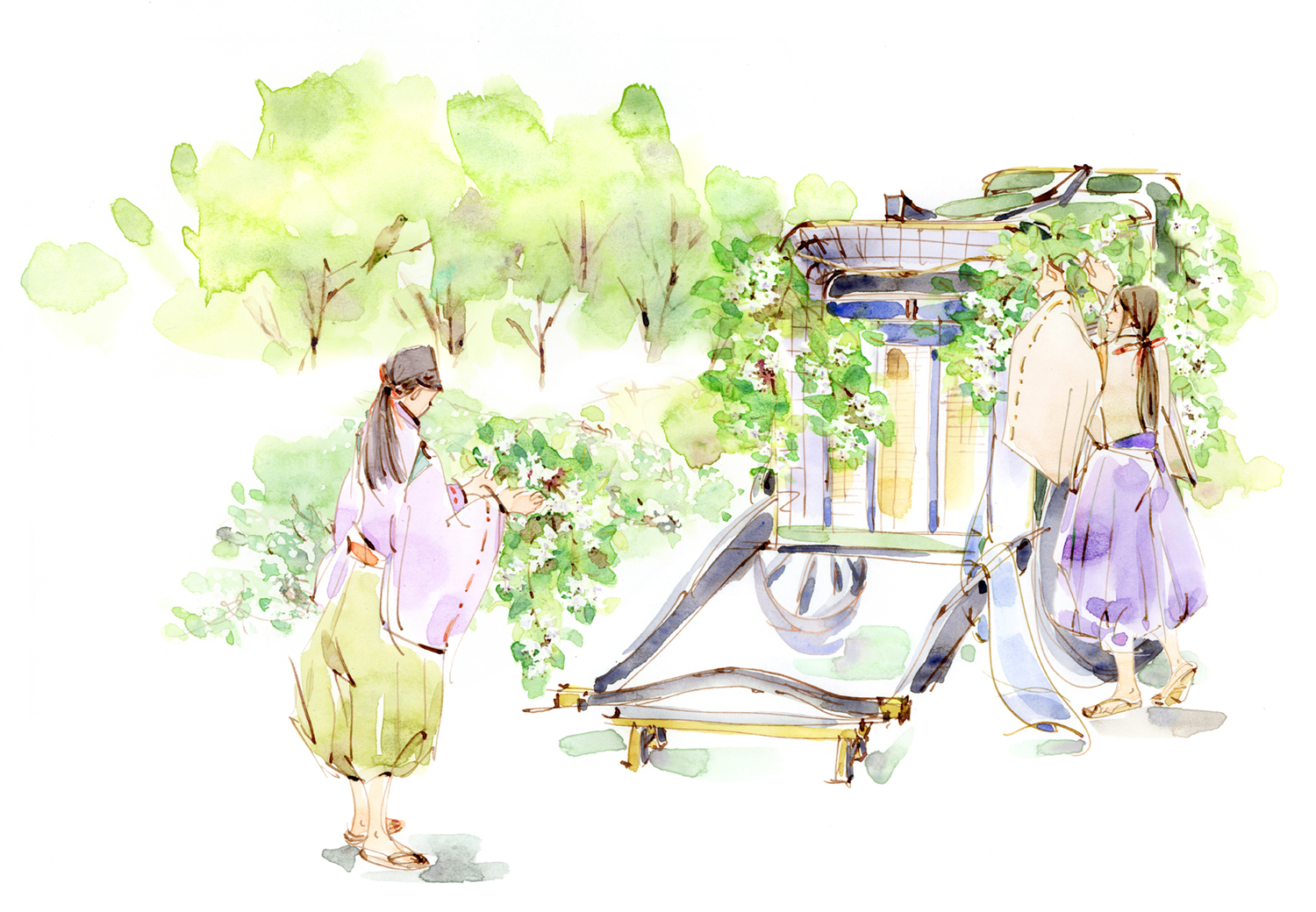 There’s a symbol person of cattle carriage in the history. The author of The Pillow Book (The Pillow Book /枕草子/ Makura no Sōshi is a book of observations and musings recorded by Sei Shōnagon during her time as court lady to Empress Consort) — Sei Shōnagon (Sei Shōnagon/清少納言, lesser councilor of state Sei, (c. 966–1017/1025) was a Japanese author, poet and a court lady who served the Empress Teishi (Sadako) around the year 1000 during the middle Heian period. ). She was a court lady who served the Empress, was asked to arrange the cattle carriage in the early morning in the plum rains season, for hearing the tweets of cuckoos with her colleagues. To listen to the tweets of the birds was romantic as the poetry elegance of the people lived in the ancient capital. The destination was her acquaintance’s villa which settled in the back of Kamo (A place in the northern part of Kyoto.), bathed in the bustles of the cuckoos, Sei Shōnagon and her colleagues enjoyed the refinement. The symbol of the event was the returning by the cattle carriage. The deutzias of the season were blooming at the roadside. Picked up the flowers and decorated on the roof and curtains of the cattle carriage, just like the cattle pulling a garden of deutzias. The cattle carriage with flowers is still in modern time, you can see it in the Aoi Matsuri, ( The Aoi Matsuri (葵祭), or “Hollyhock Festival,” is one of the three main annual festivals held in Kyoto, Japan.) one of the famous festivals of Kyoto. The main role of the festival is the cattle carriage of imperial envoy, decorated with vivid wisteria, hung on the roof of the carriage. Certainly, the idea was so popular that was praised with smiles. And the joy of Sei Shōnagon was self-evident.

Sei Shōnagon also concerned about how to drive the cattle carriage, she wrote about the different speeds of driving a cattle carriage in the Pillow Book. The HIROGE CART (A kind of cattle carriage. Insolate the leaves of areca into white, and french the leaves, then put on the ceiling of the cart. The top rank people could use this kind of cart.) which could be used only by emperor relations, nobles and imperial envoy, was evaluated by the speed, the slower the better, the faster the worse. Because only in a low speed, the marvelous details of the carriage’s body could be seen well. The carriage was able to stand by appreciation must walk in a speed could be appreciated. And it also could show the peaceful of heart and the high character of the owner. The AJIRO CART (A kind of cattle carriage. Its roof was covered by bamboo and Japanese cypress in tectiform shape. Used by bureaucrats.) which drove speedy as casual cart. It was so fast passing that you even couldn’t catch it by eyes if you had a glance at somewhere else but could only see the figure of the servant chasing the carriage. If you saw that you would wonder about who’s the owner of it, it made the consideration as active as that carriage. Indeed, the car from thousand years ago was not only a transport for driving only. But also, a piece of art to appreciate. There’s a life style just like the Sei Shōnagon who decorated her cattle carriage to make others happy. Enjoyed the season, enjoyed driving, and enjoyed the character of herself. The people of the royal court colored their life like this. This’s the ability to build the special luxury of KIWAKOTO in daily life.