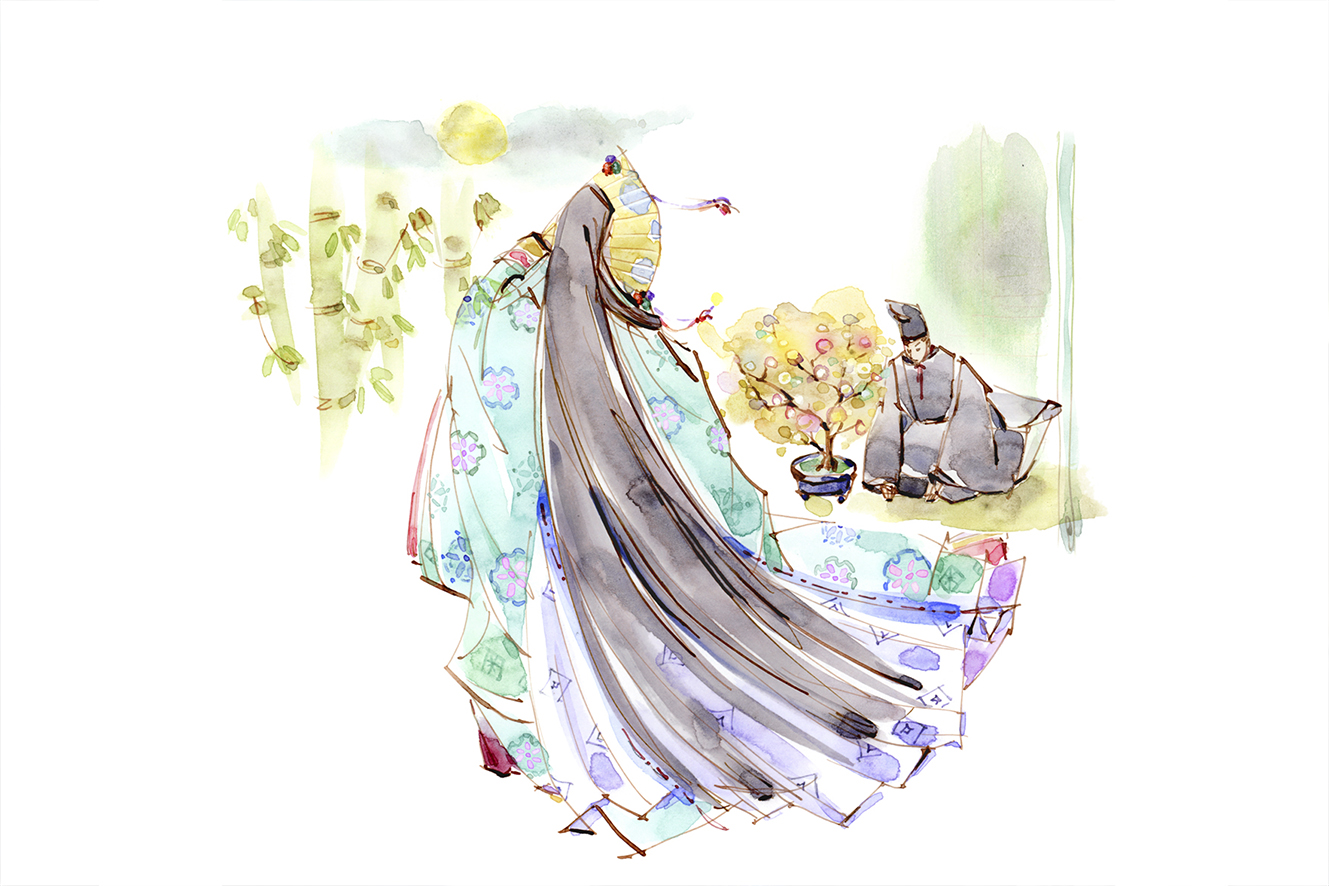 There was an Emperor Kazan (花山天皇, Kazan-tennō, November 29, 968 – March 17, 1008) was the 65th emperor of Japan, according to the traditional order of succession. ) in the history of Japan. At the end of the tenth century, he was the emperor who had been in the imperial throne for only two years. He was not interest in politics, but very good at invention and design. And he liked cars. In the historical story Okagami (Ōkagami (The Great Mirror (大鏡)) is a Japanese historical tale written in around 1119 by an unknown author. It covers the period 850 to 1025, the golden days of the Fujiwara family’s rule.) wrote about a special garage he devised. The garage was called “KURUMAYADORI” （車宿）that time, the floor of the garage was made tilt. The interior was made higher than the entrance/exit, the gates’ designed such as sturdy double French doors. The cattle carriage was always decorated well and stopped in the garage for people to use it anytime. When a sudden departure, the carriage could come out as soon as the doors open without pulling. And the driver got on the carriage after it came out. It is far from the automatic operation of the present age, but the idea aimed at the efficiency departure is interesting. Above all, the Emperor Kazan designed and created practical things was explaining Japan is a country excellent in manufacturing well.

The word 「大和魂」(Yamato-damashii, “Japanese spirit”) is a Japanese language term that refers to the cultural values and characteristics of the Japanese people. The modern dictionary is described as “the peculiar Japanese spirit”, and it is the word same with “Samurai Japan” that is familiar with the world of sports. The phrase was coined in the Heian period to describe the indigenous Japanese ‘spirit’ or cultural values as opposed to cultural values of foreign nations such as those identified through contact with Tang dynasty China. Later, a qualitative contrast between Japanese and Chinese spirit was elicited from the term. The manufacturing in that period was serving various of colorful things to nobles’ gorgeous life, artisans of Japan used the Asian continental technologies combined the Japanese usage and style, to create from large scale buildings like castles to the small things as folding fans, belts and hair ornaments etc.

The artisans were also written in The Tale of the Bamboo Cutter (竹取物語, Taketori Monogatari is a 10th-century Japanese monogatari (fictional prose narrative) containing Japanese folklore. It is considered the oldest extant Japanese prose narrative although the oldest manuscript dates to 1592. The tale is also known as The Tale of Princess Kaguya (かぐや姫の物語, Kaguya-hime no Monogatari), after its protagonist. It primarily details the life of a mysterious girl called Kaguya, who was discovered as a baby inside the stalk of a glowing bamboo plant. ). In the scene of the Princess Kaguya asked impossible demands to refuse proposes from suitors. The prince who was asked to bring the [branch of jade] from HOURAI, an island where immortals’ living, figured out a plan. First, let the boat depart to the sea, and hide with the best artisans in the secret factory. And it took thousand days to make the [branch of jade] with gold, silver and jade. Although it’s not from HOURAI, no one could say it’s fake. And the artistry was so extraordinary that even the Princess Kaguya could not see it’s false. But the lie was punctured at last, because the artisans came and asked for their salaries, the stingy prince has paid nothing for artisans’ work. And the princess broke up with him after knowing the truth. And the stingy man became a laughingstock at last.

Nevertheless, the branch made with gold and silver by artisans must have been a brilliant work, and the white jade must have been so pure. Although it’s only a fiction story, from the crafts works from Heian period which are kept in The Kyoto National Museum, we can imagine that elaborate technologies. The irresistibe charm of unique art made by high technology appealed to people whoever in past time or modern time.