Learning the “grace” from ancient times 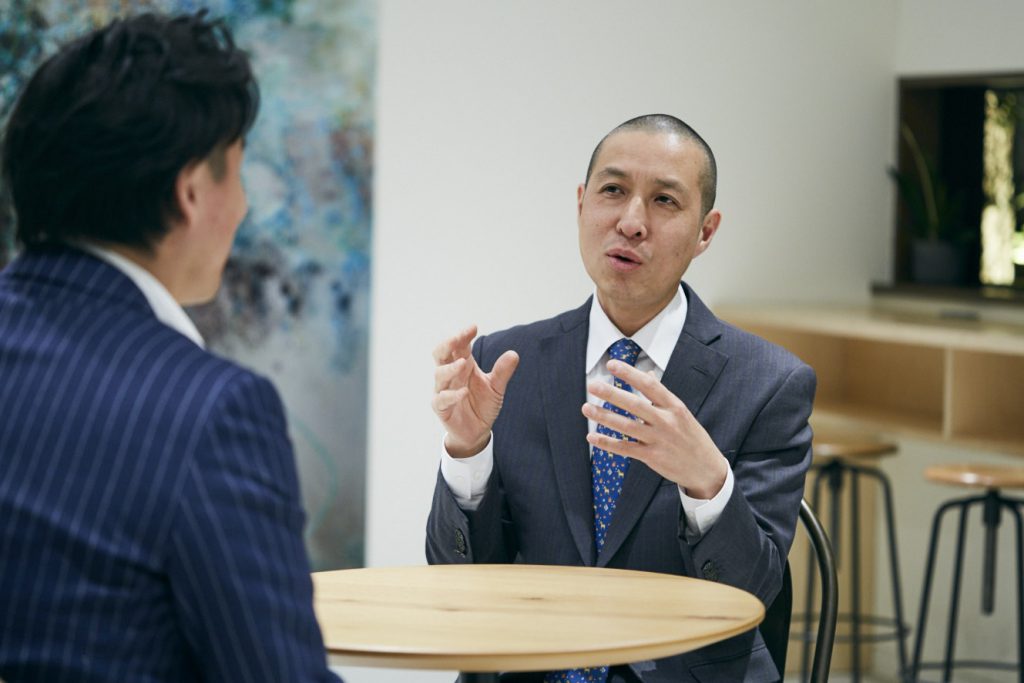 The partner Masato YOSHIHA in the dialogue this time, while he has been considering about repair the teapot from Edo Period (The Edo period (江戸時代, Edo jidai) or Tokugawa period (徳川時代) is the period between 1603 and 1868 in the history of Japan.) he suddenly used the casting technology to make the wine holders. He keeps working with the traditional methods and challenging to make new things every day.

We met each other in the working room of YOHSIHA and had a peaceful time with a cup of tea with hearing the rhythmic sound of casting. Masato’s grandfather, Yohei YOSHIHA the first was a disciple who has worked as a teapot maker of Senkejujushoku in the Onishi’s. He showed an excellent ability in making teapot, then independence from the Senkejushoku and made his own career. Senkejushoku is a joint name of painters, carpenters and other kinds of craftsmen who are working for three Senke (Omotesenke, Urasenke, Mushakojisenke, three genres of tea ceremony) of tea ceremony. Independence from the famous Onishi’s, always making new things in his career with a venture spirit, pursuing distinctiveness, this might be his fate. Masato is same as his grandfather, inherits the spirit and reconsidering about “what is a teapot”, I think we can read some of his consideration from the dialogue.

Yoshimura:
Thank you for meeting me today. Finally, the Nodate set (outdoor tea ceremony set) was completed. I think the concept of making a portable tea ceremony set made the design of the shape of the teapot difficult.

Yoshiha:
It took about one year. It’s satisfied for me able to make a simple design teapot as what I desired together with team.

Yoshimura:
I remember in the first meeting, when we discussed about how to keep the traditional teapot’s atmosphere and make a new “shape” to fit the modern style, you took some old documents of tea sets. The documents those records the works of Sen no Rikyū (千利休, 1522 – April 21, 1591, also known simply as Rikyū, is considered the historical figure with the most profound influence on chanoyu.) and his disciples. Designer Miyake and other staffs deepened the discussion after seen the documents. Why you showed the documents?

Yoshiha:
In my opinion, things left to us over centuries, whoever would think “Marvelous, I want it’s handed on”, and take very good care of it. In the other words, though it’s eliminated by time, but never forgotten by its grace.

Yoshimura:
You are right…. Although there were many things were made after it, it’s still left in the world.

Yoshiha:
For example, the fire shape pottery of the jōmon pottery (The Jōmon pottery (縄文土器, Jōmon doki) is a type of ancient earthenware pottery which was made during the Jōmon period in Japan. Traditionally dated between c. 14,000–300 BCE, recently refined to about 1000), you can feel the consideration of people lived in that time. The consideration was so amazing to make the nature into a work. Those works beyond ages and show us the intelligence and the power of study of human. 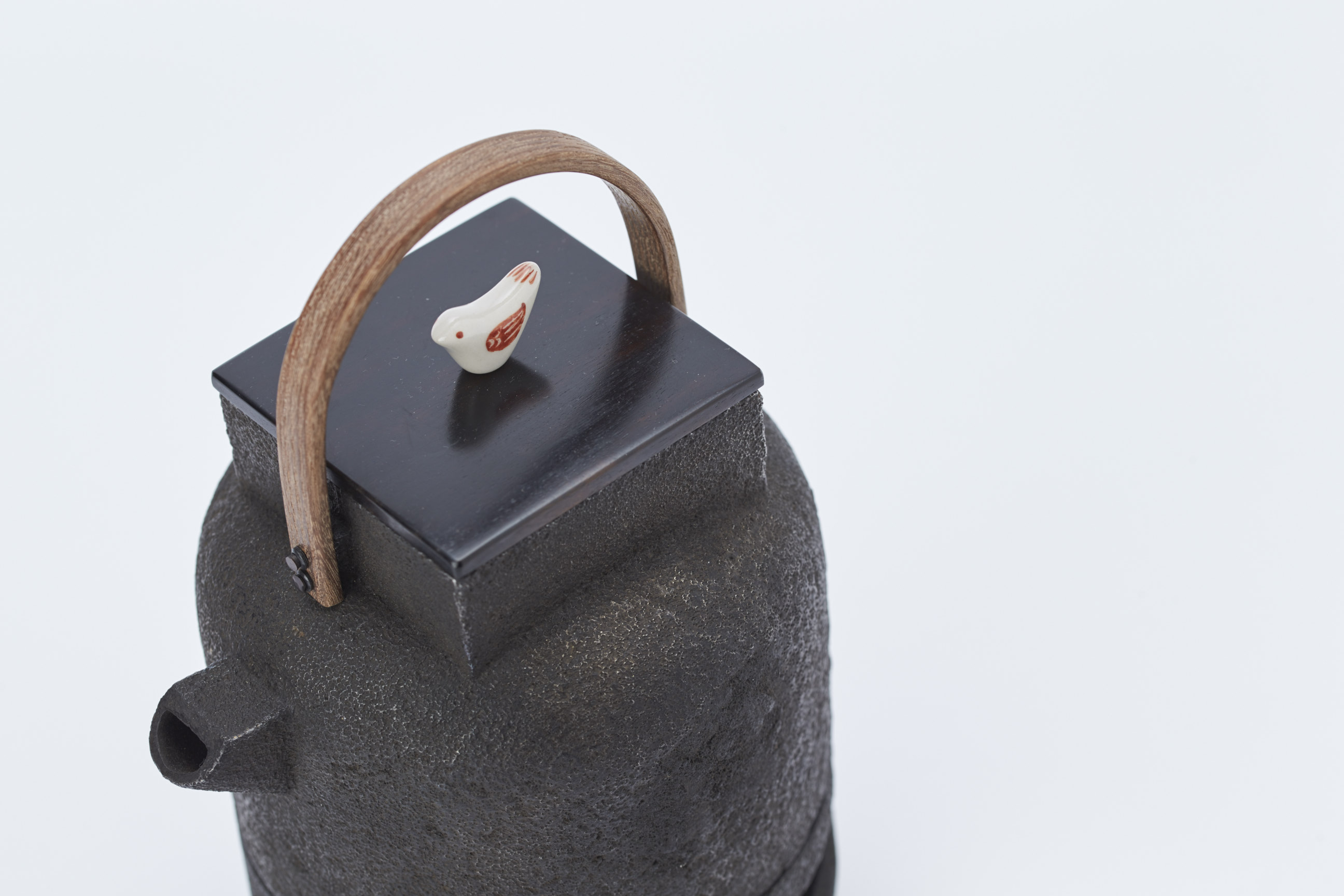 Yoshimura:
This time, for keeping the original grace of the teapot, you designed by the inspiration from the “square spout kettle” which designed by Sen no Sōtan (千宗旦1578–1658, also known as Genpaku Sōtan 元伯宗旦, was the grandson of the famed figure in Japanese cultural history, Sen no Rikyū.) the grandson of Sen no Rikyū. Combined the round and square into the making of the new teapot. I heard that you like big teapots.

Tools are things those express thinkingの

Yoshimura:
I think there are many people like me that not know much about teapots and other tools of tea ceremony. Sometimes I wonder why the tea ceremony and manners of it exist?

Yoshiha:
When the age of tea came from China first, it used to be using as expensive medicines. It’s cherished by its value. People made the special rules to discipline it through that special time. Against this background, the tea tools and manners were constructed and developed. The leaves of tea were sealed into the teapots while transport by baskets. A noble rank people’s room same as the image as the Shoin-zukuri (Shoin-zukuri /書院造 is a style of Japanese residential architecture used in the mansions of the military, temple guest halls, and Zen abbot’s quarters), must be built wide and decorous. So, if people who enjoyed tea in that situation must like tea sets which are very existential. Just as same as modern people who would like to enjoy the expensive wine contained in special glass decanter in elegant restaurant.

Yoshimura:
A sense of ritual.

Yoshiha:
That’s right. Just like arrange for a tea party, the host took months to select the tools and containers, the deserts and cuisines. And the guests also considered about the styles and character of the host to select what to wear. Both side of people enjoyed the time of arranging. It’s not a difficult rule for people to follow, but the understandings of each other, and a joy time for arranging and waiting. I want to keep making the tools which can serve the joyment.

Yoshimura:
It’s really luxury to make and arrange a special tool to fit the character for having a tea. Mr. Yoshiha, let’s have a tea party too! And thank you very much again for meeting me.