Put the “individuality” on the tradition gradually

Kyoshitsu SASAKI
Rakuyaki (Raku kiln (楽焼, raku-yaki) is a type of Japanese pottery traditionally used in Japanese tea ceremonies, most often in the form of chawan/tea bowls.) Master of Kirai Kiln
Inherited the kiln from the predecessor from his family since 1996. He’s now focusing on his work of making pottery by the kiln which lasted for 110 years. 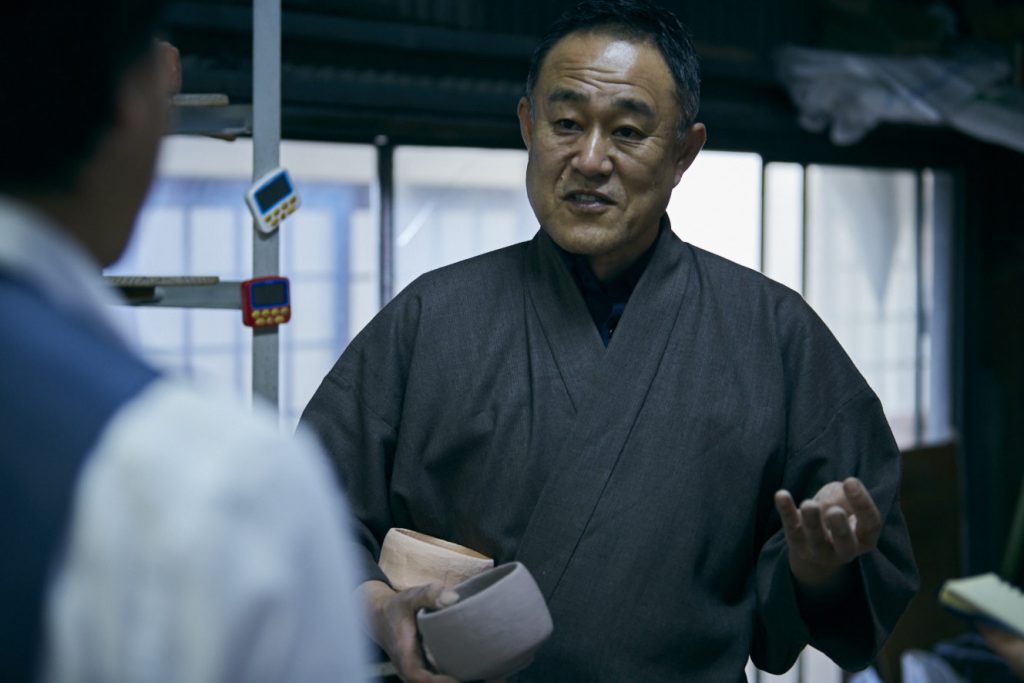 Yoshimura:
The charming point of the factory of Kirai kiln is the amorous feelings of nature. It’s very rare in Kyoto where there’s a place for people to make the pottery with hearing the voice of frogs and the tweets of skylarks.

Sasaki:
Thank you for the praise. When my predecessor has built here as the base for the work, considered about the imagine and feeling in the future, the seedling maple tree now it has grown into a beautiful Red-leaf landscape.

Beside the chawan (tea bowl), now I do the ceramic board making for the interior of tapestry too. It is very difficult to fire porcelain on a board with the technique of Raku Yaki. But this is the “individuality” which cultivated by 110 years. It is famous about a talking of Kyoto’s enterprises will be well-known after 100 years, but it’s not because of the value of ancient things, but because of the accumulation of the experience in the times, we can really feel the heritage of the culture and technology.

Of course, that products should be in good quality. And beside that, I want to make stories that can be lasting too.

Yoshimura:
Due to the documents of Rikyu, the history of Raku Yaki was over 400 years. What is the point charm of it?

Sasaki:
The biggest point charm of it is the purpose of the expression of the tea ceremony by Rikyu has born before the development of Raku Yaki. The other kilns, due to the industrial site, made teapots, plates and something else with good pottery clay.

But only Raku Yaki was developed with a story from the very first. Raku Yaki is the shape of the spirit of the tea ceremony.

For example, Raku Yaki was a technique that molding in the palm of artisans’ hands. Though Rikyu preferred the backward craftsmanship, the turning lathe fetched in Japan by Korean potters pushed the traditional craftsmanship into a mechanization time quickly.

What we want to do for the future is save the root of the culture of Raku Yaki well and keep creating.

Yoshimura:
Mr. Sasaki, are you teaching and spreading the culture of Raku Yaki to the young generation in abroad now?

Sasaki:
Yes, I am. I want to not only make the technique leave to the future, and so does the background of the culture.

By the way, can you explain the word “WABISABI”?

Yoshimura:
…I don’t think I can explain it correctly. Image of not luxury, simplest.

Sasaki:
This word is used often, but no one can explain it well.

The beauty of shortage can make a space for viewer to imagine. To find the beauty from the end of decay. I want to make the concept of beauty of Japan brand in people’s memories strongly with Raku Yaki forever.

It takes time to create culture. So I considered that I should make a foundation of the development of the culture, and the next generation can change, create and develop it little by little.